Frum Tha Ground Up was a Jacksonville based youth iniative, with Alicia Keys serving on it’s board. They were looking to take the organization to the next level and wanted to revamp their presence online. I was brought in to help the team at Hardball design and build the new digital presence for FTGU, but the project ended up being so much more than that!

On top of simply redesigning their site, we put together and implemented strategies and tactics concerning user content generation, message boards, and tying in real world events to online. ( “Social media” in 2004. 🙂 )

This site ended up becoming a SXSW finalist, won countless of other awards, and helped to procured addtional funding from sponsors to aid the youth and other initiatives.

I will always look back at this project with thanks. 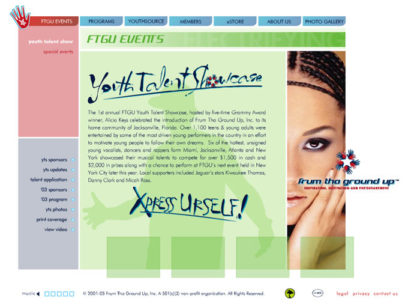 The King of Fighters XII was hurting in terms of having a mainstream community that was excited about the game. They had a flashy site, shareable widgets that created user engagement, a great contest with $10,000 in prizes, but still, nothing but crickets. The game was about a month away, and still had only 600 fans on it’s Facebook page, around 100 followers on facebook, and almost no interaction from Ignition over the mainstream audience. Now given the lineage of King of Fighters, and how hardcore the audience has been known to be, this was all wrong.

After my involvement, The King of Fighters facebook page had over 13,000 fans ready at launch, Twitter also had several thousand followers, and we had reached out and brought in advocates from neogaf, deviant art, several cosplay communities, fans of anime, import games, and several other niches that covered the demographics that would be in support of this game.

I also managed the PR crisis of laggy online play pre-launch, building trust in the Ignition company brand in the face of there not being a defined update to fix this online issues, and turned several of the biggest opponents of the game, into advocates.

All in all, a very succesful digital/social campaign.

McDonald’s was preparing to launch their new McCafe line into the highly competitive coffee industry. In order to make an impact, we knew that we had to do something that their competitors weren’t, and still adhere to a tight budget.

With that, came “Happinated”. The primary tactic was to create an interactive flash game to take advantage of the growing female gamer demographic that crossed over into our worker female 18-34 demographic and greatly catered to the worker 18-34 male demographic.

To create a further connection with the intended audience, the game itself was set within a satirized version of the workplace. We poked fun at work birthdays, the boss’s orders, copying machines, and more.

This game created an engagement average of over 3 minutes, and an email signup rate of over 60% of all visitors. This was followed up with an email blast that pushed current promotions, with an extremely high open rate of over 50%. The gaming tactic was a huge success.

The secondary tactic was to implement Twitter to be a customer service tool and an inspirational ambassador. @Happinated (on Twitter) regularly had updates that consisted of funny, G-rated jokes, inspirational thoughts, and updates on McDonald’s offers and events within the Southeast region.

Overall, McDonald’s is very happy with the performance of this campaign, and this was a great experience for me.

Nostalgia is a traditional RPG for the Nintendo DS, from the makers of Final Fantasy III and IV on the DS. The digital marketing budget for this game was extremely limited, as was the promotional time.

Given these restraints, our first mission was to reach out to advocates of the Ignition brand, and build off those relationships first. With the past campaigns, one of our ongoing goals was to build brand loyalty and create evangelists to Ignition.

The next step was to create contests and initiatives for those evangelists to promote for us. Custom landing pages were developed with promotional items being used as incentives for lead capturing. These landing pages promoted the game, and by using the contest as a lead capturing opportunity, were were able to have additional opportunities to contact and interact with our audience.

We then reached out to the anime, cosplay, Nintendo DS, and RPG communities to concentrate our message on the niches that were most likely to make a purchase.

Lastly, we created several Twitter accounts to assist the main @NostalgiaDS Twitter account. Gamers were able to interact with characters with the game and build a relationship them. Day in and Day out, characters from Nostalgia talked to fans, each other, and characters within the Ignition brand. This tactic was highly effective in furthering lead generation and creating brand awareness in a crowded marketplace.

The strategy and tactics employed for the title, helped to further cement Ignition’s brand as a publisher that cares about it’s customers, and succeeded in promoting Nostalgia as great RPG on the Nintendo DS. Hopefully, the positive remarks and thoughts associated with this launch, will continue to give Nostalgia legs to run with in terms of sales, and make each Ignition title launch more successful than the last.

Muramasa: The Demon Blade is a niche title for the Nintendo Wii. It received a multitude of awards from the gaming press, but like many titles, had the difficulty of meeting sales expectations amidst a very limited marketing budget. Ignition proposed that I work on this title and see what I could do with no marketing budget social, and solely having swag and the time of those at Ignition. Wonderful.:)

I worked with Ignition to develop a social strategy and the appropriate tactics to exact that strategy to completion, while adhering to there budgetary and logistical contraints.

Muramasa hit over 10,000 fans within 2 months of my involvement. We empowered the community with several user generated initiatives that assisted in gaining a viral presence and gaining ground in organic search of Wii titles. We also made sure to embrace and give adulation to key members of the community to create an environment where they can lead and the community can be self sustaining for the most part.

The overall atmosphere has stayed positive, with community members to this day pushing out there own content with a community manager now acting in a limited capacity. Overall, a tremendous success.

With Twitter, were able to quickly build a following that consisted of many influencers within the Wii and anime community. We also utilized the successful Twitter accounts created with ing of Fighters XII to assist and give personality and life to the newly created characters of Momohime and Kisuke. Fan were frequently involved in the quarreling and lives of Momohime and Kisuke on Twitter, and at the same time paying attention to link and product driving contests pushed by the corporate Muramasa Twitter account.

In addition Twitter parties, hashtagging tactics, and retweet initiatives pushed 1,000s of clicks towards Muramasa, and trneding Muramasa to #4 on Twitter.

With Muramasa , I created wallpapers for Iphone, Desktop, and Android, and deployed, tracked, and tagged them to increase the Muramasa’s presence in the market across several social platforms and generate sales.

To assist building up a database of leads to market the game to, landing pages and email creatives were designed and built to work in association with social based contests. The contests drove participants with a landing page that collected the lead, rewarded them with exclusive content on sign up, and resulted in open rates of over 95% and click rates of over 90% from each signup event.

With every social project it’s important to be able to track and measure the impact of the work. With Muramasa, I was able to track and measuer the performance of link distribution, the market share of voice that Muramasa was capturing, measure what aspects of the game the audience was more interested in, and show a definite ROI on Ignition’s investment.

With Muramasa, we had a much firmer grasp on the logistics of the company and established relationships with several bloggers and web site owners who had their own audiences, to assist in marketing the game. We created several sustaining relationships, created fulfillment procedures, and created protocol for how to conduct business with other influencers.

Not bad for not having a social budget?

The bank industry has been enduring a turbelent storm for quite some time now. Everbank, however has been able to prosper by investing in foreign currencies during times when the US dollar waned. To capitalize on this, Everbank needed a digital campaign to expose it’s foreign investment plans to its audience.

I designed and developed multiple banner ads, landing pages, and email creatives, that displayed how Everbank is a company that does traditional things in non traditional ways. It was important to visually convey this message, as tradtional ways are what have put many companies in dire straits.This campaign ended up having a clickthrough rate above industry average, and some great work.

Thank you for this opportunity, Everbank.